The new trains will cut the journey between the cities to nearly five hours, making them twice as fast as the existing trains."
at 1:40 PM No comments: 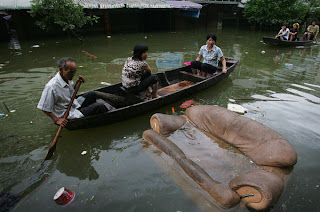 Flooding in China is currently affecting approximately five million people [GALLO/GETTY]
Climate Change: It's bad and getting worse - Features - Al Jazeera English: "The rate of ice loss in two of Greenland's largest glaciers has increased so much in the last 10 years that the amount of melted water would be enough to completely fill Lake Erie, one of the five Great Lakes in North America.

West Texas is currently undergoing its worst drought since the Dust Bowl of the 1930s, leaving wheat and cotton crops in the state in an extremely dire situation due to lack of soil moisture, as wildfires continue to burn."
at 5:59 AM No comments:

Climate disruption in China. We need to eliminate the private auto, not make it electric. 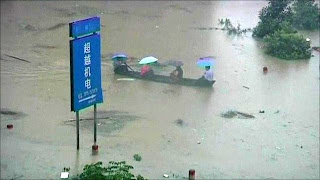 BBC News - Fatal floods hit China forcing over 500,000 to flee: "China has raised the disaster alert to the highest level, as flooding spreads across central and southern provinces
Days of torrential rain have forced the evacuation of hundreds of thousands of people in central and southern China.
The government has described flooding in some areas as the worst since 1955 and has mobilised troops to evacuate some 555,000 people." 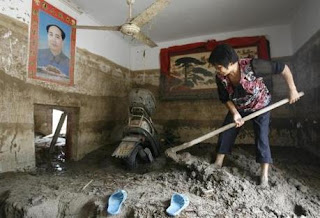 Forecasters warned that intense rain was likely to keep striking some areas through Monday and beyond.

In Yueyang in Hunan province in the south, weather stations recorded more than 200 millimetres (eight inches) of rain in six hours, the kind of downpour that hits once every 300 years, the China News Service reported, citing local officials.
at 3:08 AM No comments: