A free bus fare policy has been implemented in Chengdu, capital city of Southwestern China’s Sichuan Province, on the 10th October, which has triggered a heated discussion in Xiamen. Many citizens have discussed whether Xiamen should have such a policy, reported Strait Herald.
Some citizens tweeted on Sina Weibo, the popular microblogging platform in China, advising the authorities to adopt a similar policy to further encourage the use of public transport in Xiamen, while most citizens said they are against the plan, citing the ‘chaotic’ public transport system in Chengdu after the policy was implemented there. They also pointed out that the policy was introduced concurrently with a strict restriction on private cars to alleviate traffic jams.
Xinhua news agency reported that the policy drew larger-than-ever crowds to bus and metro stations, and many Chengdu citizens complained they could not catch a bus.
“Bus fares are already very cheap in Xiamen, and a free bus fare policy won’t increase its competitiveness against private cars,” said a private car owner in Xiamen. “Many private car owners will still choose to drive their cars because it’s more convenient and they can get direct access to their destination.”
Zhu Jianghuai, a member of the Standing Committee of the Municipal People's Congress, believed that a free bus transfer policy will be more beneficial than a free bus fare policy.
“We can improve our public transport system by adding bus shuttles, opening more bus routes, and setting up more bus stops especially in the mainland districts,” Zhu said.
Relevant departments have said they will keep an eye on the results of the free bus fare policy in Chengdu and continue to improve the public transport services in Xiamen.
Xiamen News. 16 Oct 2012.

Click to read Chinese version
SOURCE: WOXnews.com
at 8:11 AM No comments:


PUNE: The 'PMP Bus Seva Bachao Abhiyan' - an initiative taken by city based bus commuters groups to save the city bus transport, has cited the example of how China has taken steps to encourage people to choose public transportation.
The commuters groups have circulated emails to the officials of Pune and Pimpri Chinchwad municipal corporations saying that only increasing the bus fleet is not enough and that bus transport should be economical, efficient, safe and affordable for common people. The commuter groups have attached media reports with their emails describing how China has made bus travel free to encourage public transport. The report says the southwest Chinese city of Chengdu, capital of Sichuan Province, has waived bus fares and offered discounts on metro fares. A spokesman with the Chengdu Municipal Public Transport Group Corp, has said that the free bus fare policy will remain in effect until June 30 next year.
Around 15 bus commuters groups who are participating in the PMP Bus Seva Bachao Abhiyan had recently held protests at several places in Pune and Pimpri-Chinchwad after the city bus transport company - PMPML - announced its decision to increase bus fares. The bus commuters groups have also asked the state government to intervene and impose a stay on the increase in bus fares.
The Times of India. 14 Oct 2012.
at 10:51 AM No comments:

China is switching to public transport

Authorities are offering free bus rides in downtown areas of Chengdu, capital of Southwest China's Sichuan province, in a bid to encourage the use of public transport and ease the city's traffic gridlock.

From Wednesday, 33 bus routes operating on, and in-between, Chengdu's Second and Third Ring roads will be free of charge.
Another 11 free bus routes will start operation by the end of this month.
The move comes as local authorities introduced traffic restrictions in the same area the free buses will operate.
As of Monday, the last two numbers on a car's license plate will determine when it is permitted to drive in the downtown areas of Chengdu. Monday's numbers are 1 and 6, Tuesday is 2 and 7, Wednesday 3 and 8, Thursday 4 and 9, and Friday 5 and 0.
The traffic control measures will be in force between 7:30 am and 8 pm. There are no restrictions on weekends.
The free bus rides and traffic restrictions will be in force until June 30 next year.
Chengdu joins Beijing and a number of provincial capital cities in China by introducing strict traffic control measures.

Growing congestion
Local transport authorities said traffic control is easing road congestion in urban areas and reducing traffic pollution.
Chengdu has more than 2.1 million vehicles. Since 2006, the number of vehicles has increased at an annual rate of 20 percent, Chengdu Daily reported.
The construction of new subway lines, road expansion and the building of new road exchanges have further aggravated congestion.
"It looks like there are construction sites everywhere in Chengdu now," said Li Xiao-yong, a local taxi driver. "More often than not, I advise my passengers to get out of my car and take a motorbike taxi if they are in a hurry," he said.
The congestion has also cut his daily turnover from more than 600 yuan ($90) to 450 yuan.
The average road speed during rush hour in the city was only 13 km per hour as of August, Chengdu Daily reported.
Traffic has also been a major source of pollution in the city.
Tu Zhi, deputy director of the transport committee of Chengdu, told a news conference on Sept 12 that Chengdu will have another 2,000 buses on its streets by the end of this year and the city's seniors will be permitted to take a total of 900 free bus rides every year from October.
Along with the free bus rides, the local subway company will offer residents a 20 percent discount when they use subway payment cards.
Wang Yu, a manager of bus routes from Chengdu Public Transport Group Co, said the free bus service is aimed at encouraging more residents to refrain from using private vehicles and switch to using public transport.
Luo Chuyi, 63, was among the first group of local residents to ride on the free buses on Wednesday.
Luo's son runs a flower plantation in the western part of Chengdu, so she decided to help deliver the flowers from her son's plantation to suburban areas using the bus.
"Delivering the flowers by taking public transport is good exercise for me," she said.
Gao Bo, a bus driver whose bus route is in the city's First Ring road area, hopes the free bus rides will be extended to other areas of the city to ease congestion.

Free buses to encourage public transport use in Chengdu City

In a bid to encourage people to choose public transportation, the southwest Chinese city of Chengdu, capital of Sichuan Province, waived bus fares and offered discounts on metro fares from today.
According to a spokesman with the Chengdu Municipal Public Transport Group Corp, the free bus fare policy will remain in effect until June 30 next year.
Today, 33 bus routes went fare-free, and the number will increase to 44 by the end of the month.
The mega-city on Monday introduced a regulation ordering some vehicles off the streets on certain days depending on the license plate numbers, a system that has also been carried out in Beijing and some other Chinese cities to help ease traffic congestion.
However, the vehicle restriction and bus fare exemption policy brought new troubles this morning, drawing larger-than-ever crowds to bus and metro stations, state-run Xinhua news agency reported.
Many netizens vented on Sina Weibo, China's popular microblogging service, complaining that they could not catch a bus in the morning.
"Today, I was lost in Chengdu's chaotic public transport system," wrote netizen 'Hejin firefly'.
The company will continue to improve public transport services by adding bus shuttles and opening more bus routes, among other measures, to cope with increasing demand for public transport, the spokesman for the public transport company said.
Despite the complaints, netizens in other Chinese cities such as Nanjing, Ningbo and Shenzhen called for other cities to usher in such incentives.
Like all big cities in China, Chengdu sees heavy traffic jams, especially during weekday rush hours, with drivers complaining about slow movement of vehicles during peak traffic times in the city's downtown.
The three cities, Beijing, Shanghai and Guangzhou have restricted the purchase of new cars to ease traffic on the roads. 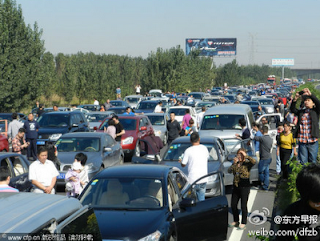 Golden Week: Huge Traffic Jams In China - Business Insider: "It's "Golden Week" in China (meaning there are a bunch of holidays, prompting basically a week-long holiday), and the government has suspended road tolls, so naturally the traffic is simply epic.
Reports from Xinhua indicate that 85 million Chinese -- 13% more than last year -- hit the road."