Nature is talking. Are we listening?

Toronto Globe and Mail
Thai floods may disrupt global electronics supply chain for several quarters - The Globe and Mail: "Global electronics firms expect supply disruption caused by flooding in Thailand to continue for several quarters and the Thai operations of Japan's Toshiba Corporation are expected to resume in January at the earliest, executives said." 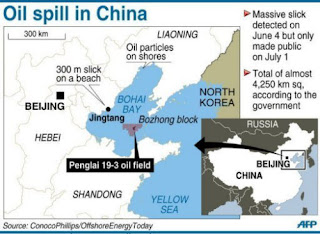 Outpouring of grief as China's hit-and-run toddler dies: "GUANGZHOU, Oct.21 (Xinhua) -- A Chinese toddler who was hit by two vehicles on a market street and subsequently ignored by 18 passersby died in the hospital on Friday, doctors said. Her death triggered a nationwide wave of mourning, as the incident has been closely followed by people who are concerned about a seeming lack of morality in Chinese society."

China May Surpass U.S. Per Capita Carbon Emission Levels By 2017

China May Surpass U.S. Per Capita Carbon Emission Levels By 2017: "The report states that China's per capita carbon emission were at 2.2 tons in 1990, but have since risen to 6.8 tons. That amount is about equal with Italy and more than France. During that same time frame, U.S. per capita emissions have dropped from 19.7 tons to 16.9 tons."