East China Sea Island dispute is all about oil 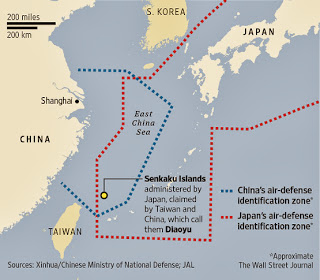 National Geographic (October 2012) : "In Asia, and especially in China, demand for power and fuel is fast outstripping supply. (Related: "Pictures: A Rare Look Inside China's Energy Machine") Meanwhile, advances in deepwater drilling technology have put offshore oil and gas resources within reach for the first time. The result of all this, says Stephanie Kleine-Ahlbrandt, Northeast Asia director of the International Crisis Group, which studies conflict hot spots, is a "race to assert control over energy resources in disputed territories before they are developed by a rival."

Last spring China began drilling in deep water in the South China Sea—rattling Vietnam, the Philippines, and other nations that have competing territorial claims."

The people of China need to stop and think. Should China go the way of the U.S. -- dependent on cars, and constantly at war over resources?
at 10:21 PM No comments:

Could cities of the future have free public transport?

CNBC: : "Anyone living in a large, bustling city will have experienced the manic crush of rush hour and the overwhelming congestion it can bring to a city's roads. Attempts to reduce gridlock have included everything from congestion charges, such as in London, to public bike schemes, as seen in Buenos Aires, Paris and Hangzhou, China.
This January, Tallinn, Estonia, took a radical step in its efforts to reduce traffic jams, and became the first capital in the European Union to offer its residents free public transport."

Next City: "At 9 p.m. on June 30 last year, the city of Guangzhou caught car sellers and buyers by surprise. The municipal government hastily called a press conference and announced, without warning, that starting the following day only 10,000 cars could be sold per month. The move would be an effort to unclog the city’s roads and clear up its skies, both of which were being choked by a boom in vehicle sales."